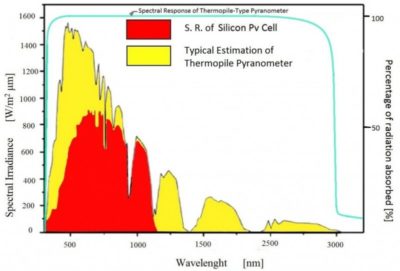 A thermopile pyranometer is capable of picking up the whole of the solar spectrum that arrives on Earth’s surface, from the ultra-violet (UV) to the far infra-red (FIR). This can be seen in Fig. 1, where the yellow area represents the reference solar spectrum.

This peculiarity allows the pyranometer to carry out an accurate measurement of the solar irradiance on the Earth’s surface (quantity expressed in W/m2), thus making it a unique tool for the study of meteorology and climate change.

Another distinctive feature is its very low drifting. In a photovoltaic field, the output returned from a pyranometer continuously exposed to sun and freeze stays the same for a very long time. Deviations within 1% from those of our reference thermopile pyranometers, installed on the system for 2 years (SR20) have been registered (such feature has been observed on the pyranometers of the best manufacturers).

Unfortunately, the ‘flat’ spectral response of thermopile-type pyranometer (see Fig. 1, cyan bell curve) is an element that could reduce accuracy when measuring the performance of a photovoltaic system.

The extra-atmospheric solar spectrum is superset A, the wide portion of spectrum (in this case frequencies act as elements of the sets) arriving on Earth’s surface is subset B, and the portion of spectrum (again, frequencies) that can be converted in electric energy from a PV module, is subset C. Assuming subsets B and C to be variable through time, a device capable of identifying all the recurrences of the frequencies in set C in a given moment, and those only, has to be selective. Which means, it must be able to identify the recurrences in set B in order to single them out, otherwise misrepresenting any measured value. Let us assume a system capable of converting just the elements in subset C into electric energy. Efficiency of System is then given from the relation between the measure of energy production and the measure of frequencies in subset C in a given moment, i.e. the power of that portion of the solar spectrum.

A PV cell pyranometer has the same receiving surface of a PV module – a flat glass – but his strength lies in possessing the same receiving capacity of a PV module (non-linear response, see red area in Fig. 1). This means that a quality PV cell pyranometer receives the full spectrum that can be picked up by a PV module, and only that. In this way, the sensor acts as a reference of all the solar irradiance power receivable from a Si-crystalline module.

The relation between the output power (normalized at 1000) and the value of only that irradiance power allows the correct measurement of financial performances of the PV system. Thus, a drift towards minor efficiencies of the photovoltaic power system might be observed by a monitoring system that has a PV cell pyranometer with the required precision.

These premises aside, there is the ‘pragmatic assumption’ between many workers of the sector (O&M, Asset Manager, etc.) that deviations between the measured values of irradiance carried out by thermopile-type and PV cell pyranometers, are established between 3% and 6%.

Contrary to this, preliminary data from a study with the Department of Physics of the University of Milan show how deviations vary between 3% and 13%. Of course, this does not include marginal moments like an abrupt variation of irradiance given by the passage of clouds, spiking the deviations up to 80%. This is understandable, considered the difference in the speed of response between the two types of sensors. Even at sunset, deviations above 15% between the two measured values of irradiances have been noted.

The three graphs below show the percentile variation of irradiance detected by a thermopile pyranometer and a monocrystalline photovoltaic cell pyranometer.

Currently, we are analising this data with a spectrophotometer with the Department of Physics at the University of Milan.