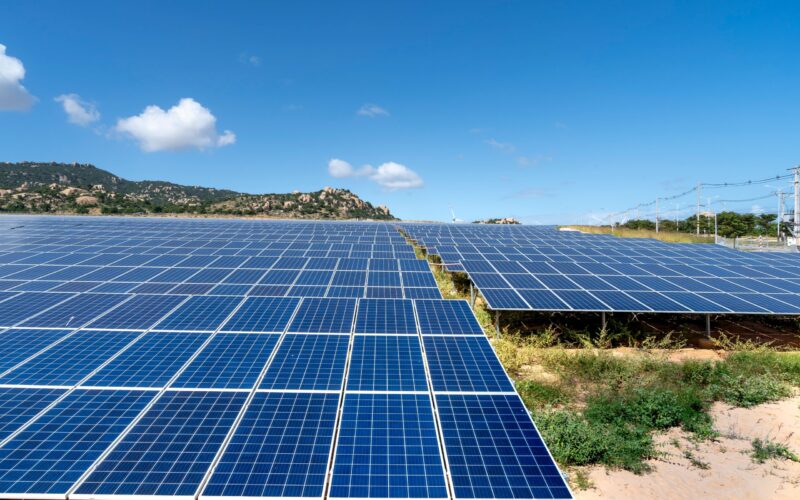 The spectral response of photovoltaic pyranometers

Thanks to the spectral response of photovoltaic pyranometers, the calculation of the Performance Ratio is more accurate

One of the most important elements of a photovoltaic system is its performance, more commonly referred to as the performance ratio. P.R. (from P = Performance, result and R = Ratio); it defines the ratio between actual energy yield and theoretical yield; it is expressed as a percentage.

The actual available energy and fed into the grid is obtained by measuring on the 3 phases current, voltage, power factor by integrating the product given by current times voltage times power factor for the time unit considered, using a network analyser or a Class A energy meter.

The theoretical energy available is just the in-plane incident solar energy of the photovoltaic modules. It can be measured with different types of pyranometers, but the results are not always the same. 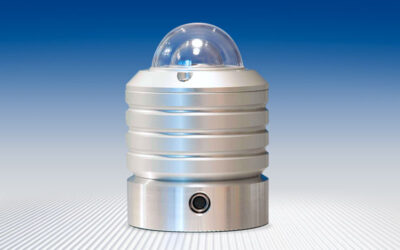 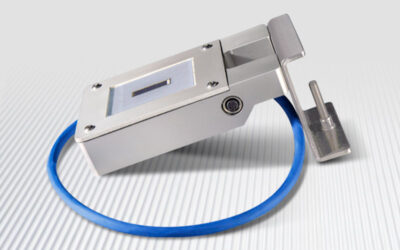 Assuming that all instruments are correctly calibrated according to the respective standards, the irradiance measurement is a quantity given by the integral of the spectral response, which is the sum of the sensitivity at the various wavelengths for which the sensor in question responds with an electrical value.

The spectral response is one of the most convincing arguments in favour of using a photovoltaic pyranometer in order to achieve accurate results in the calculation of the P.R. 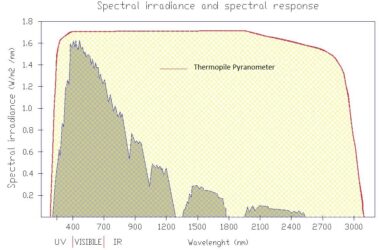 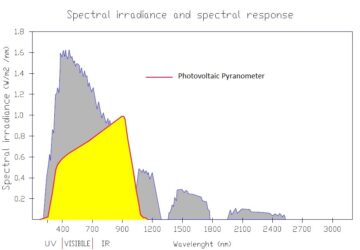 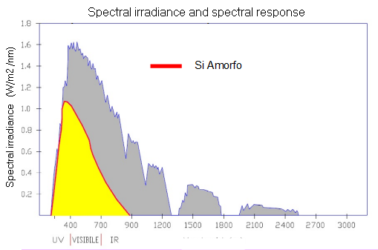 It can be seen that the thermopile pyranometer is able to record a very broad spectrum of the entire solar radiation. However, if we look at the physical-electrical characteristics of the cells that make up a photovoltaic module, we see that they produce (photovoltaic) energy when they are hit by light radiation in the 350 nm ÷1150 nm portion of the spectrum.

At this point, it is easy to understand that all solar radiation with a spectrum greater than 1200 nm is not “detected” by a PV module and is therefore not converted into electrical energy; a thermopile pyranometer detecting wavelengths up to 3000 nm would distort the Performance Ratio.

Let us take a practical example:

What happens in these recurring cases:

As we approach afternoon, the spectrum undergoes a change not only because it decreases in intensity compared to solar noon, but also because there is a shift in its composition: the I.R. (infrared radiation) component increases. 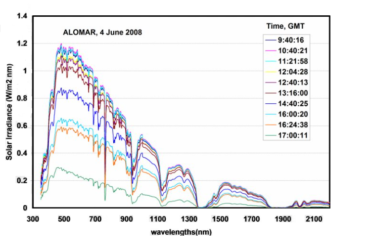 Which measurement is the right one?

If we listen to the opinion of a meteorologist, then we agree on the performance ratio calculated from the data of the thermopile pyranometer; if, on the other hand, we talk to a photovoltaic operator, he will prefer the P.R. calculated from the data returned by the photovoltaic pyranometer because he is only interested in the power variations that allow a photovoltaic conversion to be compared with the output power of his photovoltaic system. The more accurate the result obtained from the P.R. calculation, the more certain he will be able to detect performance drops and possible malfunctions.

The deviation between the two P.R.’s calculated with the two types of pyranometers cannot be improved by applying a fixed multiplication coefficient between 0 and 1, as it does not take into account variations in the solar spectrum. The solar spectrum changes depending on the height of the sun (and therefore also on the latitude) and also throughout the day, although to a lesser extent.

This is not a new argument or a new hypothesis. If we think about it, radiometers with a very selective sensitivity are used to measure UV (from 210nm to 350nm), and radiometers with a selective sensitivity from 750nm onwards are used to measure IR (from 750nm).  Similarly then, in order to obtain an accurate calculation of the Performance Ratio and to understand if the system is achieving a lower or higher performance than expected, the choice must fall on a good photovoltaic cell sensor.

Nevertheless, thermopile pyranometers have the advantage that their measurement is stable over several years. I would conclude by saying that if stability is needed over the years, I would suggest thermopile pyranometers; if, on the other hand, more accurate results are needed in calculating the P.R., I would choose photovoltaic cell pyranometers (or irradiance sensors), knowing, however, that in order to maintain that accuracy, they need to be calibrated every two years. However, current regulations indicate that all these sensors need to be calibrated every two years.