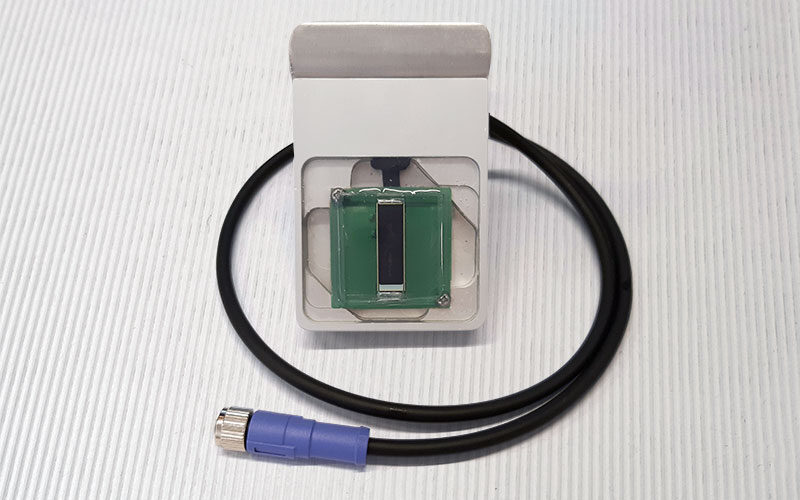 Litemeter Current PAR is a silicon pyranometer with a filter for Photosynthetically Active Radiation (PAR) – the wavelength of light plants used in photosynthesis. It can be used outdoors, in greenhouses, in water or in growth chambers. Ideal for use in floriculture, agriculture and biology. There are similarities between the photovoltaic phenomenon and the ‘light-dependent reaction’ of photosynthesis. The Sun is the primary energy source. Electrons jump in the upper atmosphere when hit by the Sun’s rays. Thanks to a dedicated filter, a PAR meter measures the spectral portion of the light in the 400-700nm range along a planar surface which corresponds to the PAR (Photosynthetically Active Radiation). This is the precise wavelength on which plants photosynthesize. The measure of PAR along a flat surface is called PPFD or PARMETER in experimental growth chamber for algae “Photosynthetic Photon Flux Density”. It differs from “Photosynthetic Photon Flux Fluence Rate” (PPFFR) which is revealed by spherical sensors of PAR. Litemeter Current PAR measures PPFD. It can be used outdoors, in greenhouses, in water or in growth chambers. Output is in current loop and values can be easily converted in µmol of photons per square meter per second (µmol /(m2 * s) ) S.I. Units. The price is competitive and makes the “precision / price” ratio very interesting.

Calibrated for comparison with our silicon reference cell calibrated periodically by the Dakks accredited ISFH Institute and a multimeter HP34410A with over 0.2% accuracy.

Detecting electromagnetic radiation in photosynthetic wavelengths (400-700nm) is useful for monitoring research and economic production activities where biological growth is important. For example:
Note: A PAR (Photosynthetically Active Radiation) Sensor measures photosynthetic light levels in both air and water. The sensor responds to visible light in the spectral range that is used by plants in photosynthesis (400–700 nm). PAR meters are used widely in agriculture and environmental studies.