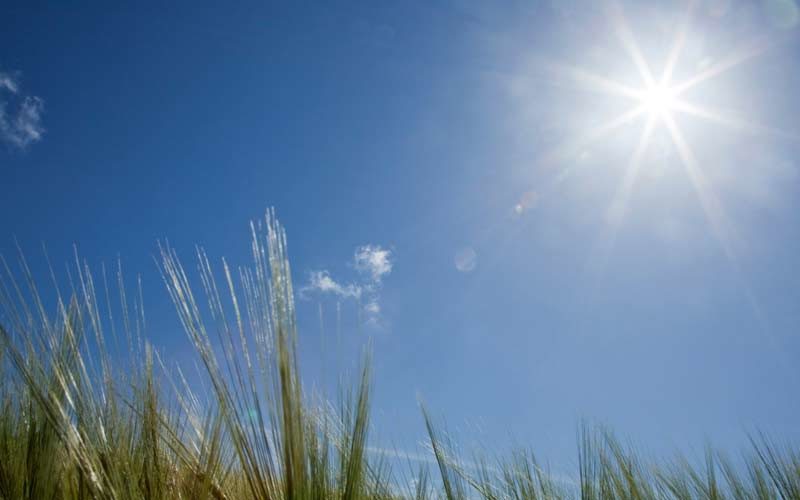 The Sun’s surface (or photosphere), has a temperature of about 6000K and its behavior approximates that of a “black body”. Considering this, it is possible to calculate the total power emitted by the Sun as approximately 9.5×1025W.

This total power emitted by the Sun is not composed of a single wavelength but many. Moreover, only a fraction of the Sun’s radiation reaches the Earth. 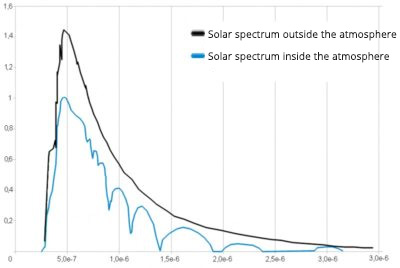 The average energy radiated by the Sun per unit of time onto a normal surface located outside the Earth’s atmosphere is called the solar constant and its average value is about Ics = 1353 W/m2.

The presence of the atmosphere has however different effects on the radiation that reaches the Earth’s surface.

The radiation undergoes a power reduction due to absorption, scattering and reflection in the atmosphere. The spectral content of the solar radiation also changes due to the increased absorption or scattering suffered by the long wavelengths. Moreover, there are components of diffuse and indirect radiation.

The result of all this is that the total radiation reaching Earth’s surface has less strength: approximately 1000W/m2 of power and an altered spectral distribution.

The productivity of a solar cell

The productivity of a solar cell depends on several factors.

First of all a solar cell does not respond consistently to all frequencies of the incident radiation. The efficiency of a silicon cell is maximum in the frequency range of visible light.

Secondly, the productivity of a solar cell and consequently of a photovoltaic system depends on the incident radiation hitting its surface.

There is another effect that influences the performance of a PV system: the temperature. Like all the other semiconductor tools, solar cells are sensitive to temperature. An increase in temperature reduces the “band gap” of a semiconductor affecting most of their parameters.

High temperature causes a reduction in energy production of a photovoltaic system.

To do this there are essentially 2 types of device: the solarimeter and the pyranometer.

Solar radiation measurement with a SOLARIMETER

A solarimeter using the photovoltaic effect has the same response as a photovoltaic system: it produces an electrical signal as a function of the incident light. It responds mostly to visible light and its output depends on the temperature of the cell.

It captures light waves from approximately 330nm to 1100nm.

To obtain a temperature independent reading, the values measured by a photovoltaic cell solarimeter must be corrected to compensate for temperature. This measurement can be made thanks to a thermocouple. The adjustment factor must have high precision levels.

Solar radiation measurement with a PYRANOMETER

Pyranometers are instruments used to measure the global radiation on a surface (both direct and diffuse radiation).

They work by measuring the difference between the temperature of a clear bright surface and a dark one. A dark surface can absorb most of the solar radiation while a clear surface tends to reflect it, absorbing less heat.

This difference in temperature is measured using a thermopile, and the difference of potential generated in the thermopile* (due to the temperature gradient between the two surfaces) allows measurement of global incident solar radiation.

The response of this type of pyranometer can cover the entire range of wavelengths of the solar spectrum: 300 nm to 2800nm.

Note that the spectral range detectable by a pyranometer is wider than that measurable with a silicon cell solarimeter. For this reason, using a pyranometer to test the proper operation and performance of a PV system might lead you to think that the plant is not working properly under certain environmental conditions. Instead, with a silicon-cell solarimeter, the given values are synchronized to the plant since the spectral portion necessary for the operation of a photovoltaic system is the same as that measured with this device.